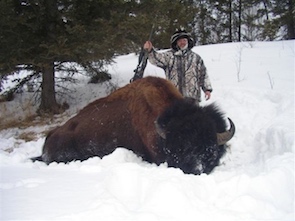 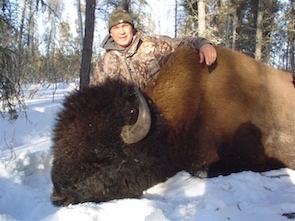 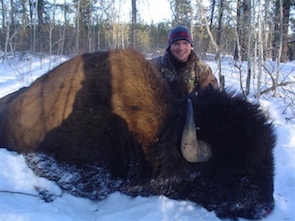 There are very few places left in this world were buffalo truly run free, Alberta is still such a place were free ranging wood bison are wilder than wild!!! I had wanted to chase these critters since I first found out about them in the early 1990’s, I finally did some research and made a plan. My research found some great history on these Majestic beasts and I can’t help imagine what North America looked like when 70 million of these giant creatures roamed free.

When bison populations were driven to the point of extinction in the late 1800’s, one of their last strongholds was an area of boreal forest, prairie parkland, and wetlands close to the Athabasca, Peace and Slave Rivers in northern Alberta and southern Northwest Territories. These bison, adapted to an environment which was partially forested, were designated as a separate subspecies, the wood bison. Darker coloration and larger size is among the perceived differences between the wood bison and the plains bison. A large park was created to protect these animals and to preserve the core of their habitat, Wood Buffalo National Park. The park is still a vast, almost road less wilderness where the majority of the population exists. During the 1920s plains bison from further south in Alberta were transplanted to this area, they are considered to be a hybrid between the plains and wood bison sub-species and as such may be imported into the United States.

Scattered populations of bison exist outside the national park, utilizing pockets of sedge/grass habitat along beaver meadows, rivers, sloughs and bog lakes within the vast boreal forest. It is these populations of wild bison outside of the park that can be hunted; the exception to this is a new Bison Protection Area in northwestern Alberta, where bison have recently been re-introduced. The only access is by float plane in spring and summer or snow machine in the winter, when creeks, rivers and swamps are frozen. So after some scouting and trail work I contacted some clients, loaded the sleds and headed to the frozen north next to the Park. As an Alberta outfitter and guide this would be the test run.

Contrary to the popular conception of a bison hunt, this may be one of the toughest hunting experiences on the continent, after a couple days in minus 36 degree weather this was very apparent. We searched for their tracks and occasionally got a glimpse of a retreating buff. When we found a fresh trail we followed them up on foot, in a similar fashion to hunting Cape buffalo in Africa except for the extreme temperatures and snow. These huge bison have been weighed at 2600 pounds and like their African counterpart a wounded bull should not be taken lightly! After 6 days of hard hunting, countless hours on a snow machine and miles of walking, Travis Peterson of Houston Minnesota got a first hand lesson on this when he downed his bison bull at a full charge with 2 shots from a .375 RUM at less than 50yds. Bison bulls may be the most dangerous game animal in North America, apart from the large bears. We often encountered them at close range and still had little opportunity at a clean shot. Earlier the same day Kevin Pearce of Fenton Michigan downed one of four dugaboy bulls that were found on a frozen lake and after a 2 hour pursuit into the dark timber made an excellent shoulder shot as the bulls bolted. Surprisingly agile A wild bison hunt is truly unique experience, not only for the trophy, but also for the opportunity to travel and hunt in this vast sub-arctic wilderness. After 2 days of full mount skinning and retrieval my American buddies headed home with the satisfaction of having hunted North America’s largest land animal and one of our western heritage’s most prominent symbols!

Now it was my turn to hunt, I had a couple days left before I had to head back home to my understanding wife, not to mention a skidoo to rescue, and tow out of the bush. We got the broken machine out and still managed to do a 4 mile hike on fresh tracks but our quarry eluded us and we headed back to camp in the dark with the northern lights showing us the way. On the tenth and last day we headed to an area were earlier we had staked a large herd with 6 giant bulls and over 20 cows and calves. We headed up a frozen creek crossing beaver dam after beaver dam and stopping to climb and glass from huge Beaver lodges. Other than climbing trees this is the only way to see very far over the jungle of willow between the open meadows were these hairy horned creatures feed.

It was mid morning, I looked down on the frozen pond and saw fresh tracks, unfortunately they were running, they had heard us. I ran forward to the next meadow and saw 2 large shadows moving past the pond threw a poplar tree thicket. Now the trail was smoking hot and we saw the steaming piles of buffalo dung on frozen ground as we followed slowly in the knee deep snow. After a mile or so I could see the animals had started to meander and a bull was destroying small spruce trees, we had to be close! Up ahead, past a spruce swamp, I saw movement. I stripped of my heavy Raven Ware parka, and did a quick equipment check and entered hunt mode. They seemed to spook again so I hurried off their trail to the right to an opening that let me see further in front of the swamp to an opening in the trees. I saw one enter the open area and braced on a tree, only a cow but they seemed calm and unaware. I checked her through the scope, I could see the rest of the small herd, 8 or so moving into view, it amazed me how close we were and still how hard it was to pick out a bull. He just appeared behind the first cow, that massive hump towering over her. The old cow moved out of the way but now the bull was facing away, I was getting the rush, I need him to turn. It seemed forever but finally he turned and I took a steep quartering shot, the whole herd bolted, one lagged behind. Broadside and mortally wounded the big bore barked and the 300 grain slug put him down for good. I filled with emotion as I approached the still giant; I had fulfilled a long time dream and accomplished what very few modern men have, hunted a wild bison.

Alberta offers one of the very few opportunities to hunt these magnificent animals in a truly fair chase situation, if you’re up to the challenge make Alberta your next destination. How many hunters can say they have a wild bison hanging over the fire place, well I now know of a couple?